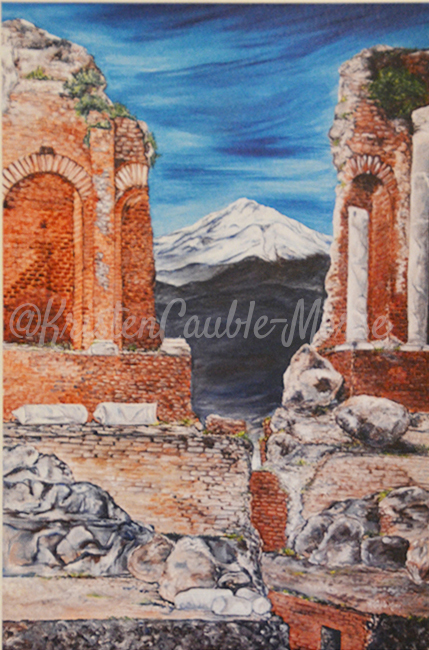 The Teatro Greco, (Greek Theater) with Etna looming in the background, in Sicily, Italy. A Terrace on the Ionian Sea.  Taormina faces the Ionian Sea and stands 600ft above it on the eastern coast of Sicily.  It is the quintessential Mediterranean town in terms of climate, the color of the ocean, the sweet scent of the brush, it’s history and monuments, the atmosphere of it’s squares and narrow streets, and the friendliness of the people.  The Teatro Greco, built in the second century BC in a natural valley, which offers the most beautiful stage setting one could wish for.  It’s a perfect setting to spend a spring evening sitting on the steps of the theater watching the sun go down behind Mt. Etna. Completely breathtaking.

A gallery wrap is when the canvas is stapled to the back of the stretcher bars and the sides of your canvas are left exposed.  This gives the canvas a clean, modern look.  You can leave the edge exposed with no frame and it is ready to hang.  Or, you can use a floater frame to highlight the edges of your gallery wrapped canvas.  Both of these options of stretcher bar have a gorgeous presentation and can end up saving you a lot on framing.